Upper Swaledale is famous for the hundreds of little stone buildings dotted all over the landscape.  They are Cow Houses (pronounced Cowus) not barns. 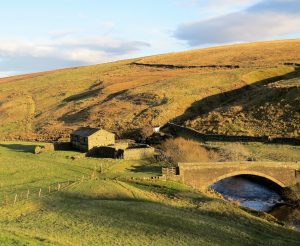 We have dozens of cowuses at Pry House Farm.  Almost everyone who stays for Bed & Breakfast is fascinated by the way the Upper Swaledale landscape is dominated by the little stone buildings and want to know what they are used for.  They were originally built to house a few cows during winter (hence Cow House) and to store hay made in the surrounding meadow field.  The hay was then on site to feed the cows and also to take up to the sheep that live out on the fell all year round.  Most farms, even the smallest of them, would have several Cow Houses to attend to twice a day.  The cows would be let out to drink in a well or the river if it was close by and whilst they were drinking the farmer would clean them out and fork hay down into the trough.  The cows would then calmly walk back into their stalls (or booses as they are called in Upper Swaledale) to be tied up.  A time consuming and labour intensive job.  In the 1960s large modern farm buildings started to appear and gradually, one by one, the cowuses stopped being used to over-winter cattle.  A few are still used to store hay as up here at the top of the dale we still make ‘small bale hay’ which can be stacked in the hay-mew end of the cowus.  But they are cowuses not barns.  Born & bred dalesmen and daleswomen in Upper Swaledale get very upset when they hear their little buildings being referred to as ‘barns’.  As one of them said to me recently, ‘There never has been such a thing as a ‘barn’ in Swaledale and there never will be!’